About Your Food Bank

About Your
Food Bank

Our mission is straightforward, simple and clear:

“We provide food to people in need”.

Our goals are to help alleviate poverty by:

The Renfrew & District Food Bank is a community-based organization focused on providing food to people in need. The food bank is governed by a volunteer Board of Directors who are elected at an Annual General Meeting. Directors are elected for a three year term with no term limits. The Board works together with numerous volunteers to deliver all the programs. If you are interested applying to join the Board of Directors, please contact our President at president@renfrewfoodbank.ca 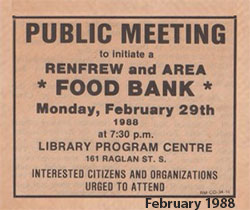 The Renfrew and District Food Bank was first talked about at a Public Meeting held on February 29th, 1988 at the Library Program Centre. Less than a month later the need for a food bank in Renfrew was determined. A task force of 12 members was formed and began to seek a location. Mrs. Marie Lindsay was chairperson of the Task Force along with fellow members Dr. Art Dick, Joan Dick, Jane Wilson, Cathy King, Valerie Martin, Rev. Craig Peters, Edna Nighbor, Marg Doering, Shirley Shaw and George Muise. Their vision and strong belief that poverty was not acceptable in Renfrew lead to the creation and opening of our food bank in fall of 1988.

The task force identified close to 1000 people in the Renfrew Area that would potentially be helped by the food bank. The food bank started out on a small scale and would expand as needed. To start the food bank was open one day a week from 10 a.m. to 2 p.m to serve its clients. 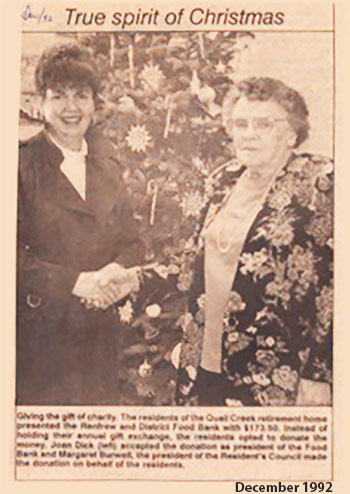 One year later the Food Bank was serving 10 to 12 families every week from Renfrew, Douglas, Eganville and surrounding townships. When it first opened it served about 25 families a month and seeing its clients double over the year they knew the need was clear.

The food bank stayed at its current location serving more families each year until we were forced to relocate to Victoria Education Centre in October of 2007. The food bank operated out of this location for 3 years until we were forced to move again due to the buildings selling. We moved into the back part of what is now Sense of Country and operated in this small location for only one year while we looked for a larger home.

In the fall of 2011 we moved into the old daycare space at the Renfrew Armouries. Once at this location we began to provide fresh and frozen food along with our typical non perishable food. Our board decided to join the Ontario Association of Food Banks in 2015. This membership allowed us to get monthly donations of milk, eggs, and regular shipments of non perishables and perishables all free of charge. This membership gave us the opportunity to apply and receive multiple grants which saw us get new shelving and more fridges and freezers.

By January 2018 we were regularly serving over 300 clients a month and we began to realize that our current rented location was not going to serve us for long if we kept seeing and increased demand. In the spring of 2019 the board tasked a committee with finding us a new larger location with a loading dock and space for a walk in cooler and freezer so we could accommodate more donations.

This committee researched many possible locations and viewed multiple buildings in the town and in April of 2020 decided to purchase the old Salvation Army church in Renfrew. This purchase was made possible with a large endowment from a supporter and two service groups willing to support our board in this decision. We will be running a variety of programs out of our new location including a soup kitchen, meeting room, cooking programs, Angel Tree, and a community garden. This is all in addition to our traditional feeding program. We are beyond excited to welcome our clients and community into our forever home at 8 Argyle Street.

Thank You to Our Partners & Sponsors